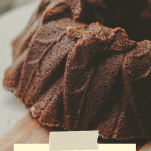 This is my favourite pumpkin cake. It is just so delicious, so moist, and so beautiful and I think you will agree after trying it yourself. Popular seasonal spices like cinnamon and nutmeg make for the perfect autumn dessert and this cake recipe is impressive enough for your holiday Thanksgiving or Christmas dessert tables too. In my version TWO glazes are made and served on the side (vanilla and cream cheese!) but you can easily drizzle the frosting or glaze on top if you wish.

Autumn is here and with it the ubiquitous pumpkin spice everything.

This recipe for pumpkin spice bundt cake is easy enough to whip up anytime with its perfectly moist and flavourful crumb.

And with Thanksgiving and Christmas approaching, this bundt cake would make a pretty sight, especially if you use an intricate bundt mould like the special pan I used in these pictures.

This recipe is as easy and seasonally appropriate as my old-fashioned fresh apple bundt cake recipe and pairs just as well with a mug of coffee, tea, or hot spiced milk or served with a scoop of homemade maple pecan ice cream on the side. 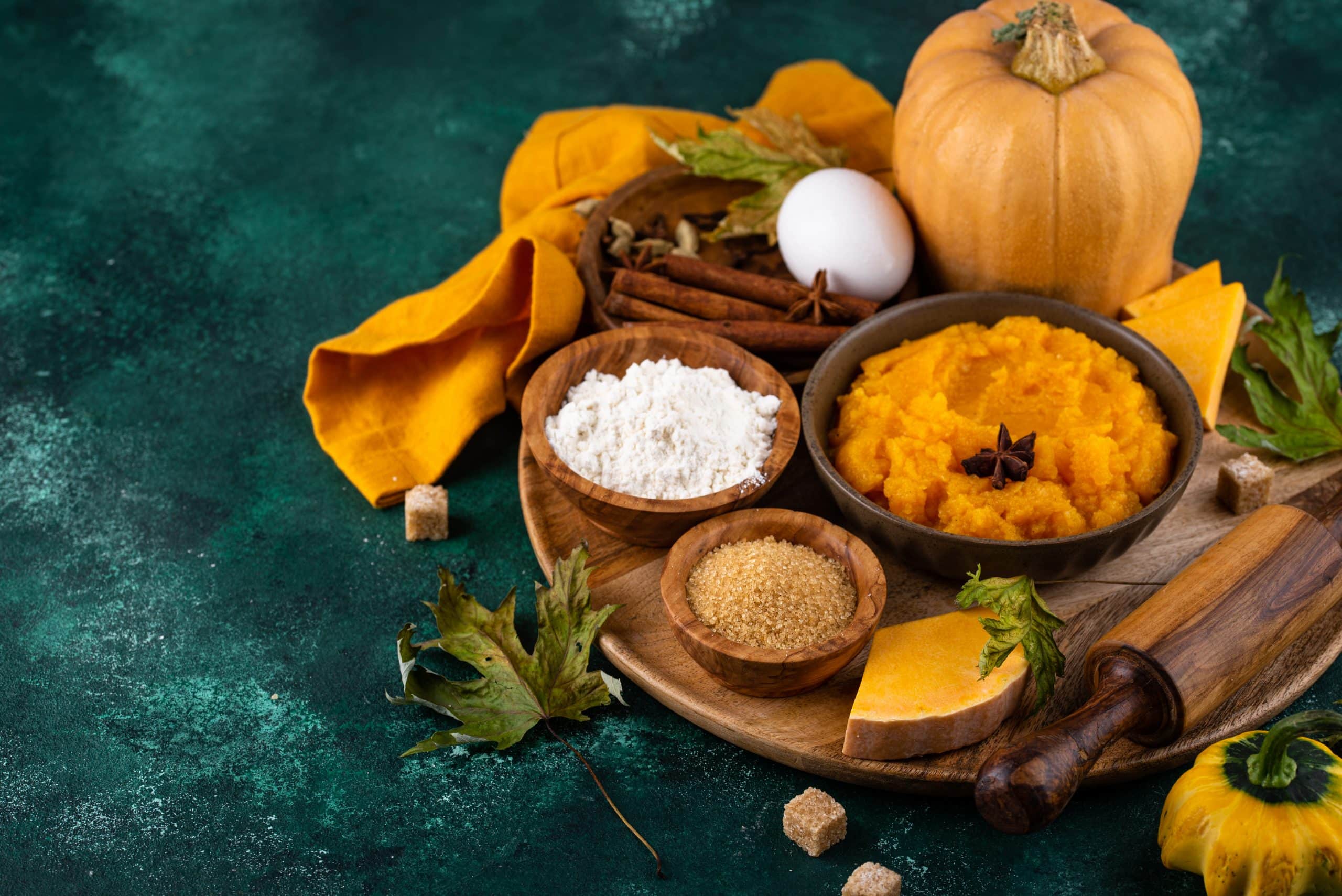 The ingredients for this cake are simple, readily available, and you likely have all or most already at home.

If you have premade pumpkin spice mix, you can use that instead of the individual spices.

You can use canned pumpkin puree (not pumpkin pie) or fresh pumpkin — more on that below.

And I highly recommend you use the old-fashioned leaf lard this recipe calls for (more on why and adequate substitutions below) and also whole spices (with the exception of ginger and cinnamon) that you grind yourself.

I use a simple mortar and pestle and the difference in taste is out of this world.

I also give you instructions for TWO quick delicious glazes in the recipe card — vanilla glaze and cream cheese frosting glaze. I love serving glazes and frostings on the side for bundt cakes but they can also be beautifully drizzled on top!

Einkorn is the first wheat that humans domesticated and grew and it is incredible as it has never been altered in any way in 10,000+ years.

The unique flavour of Einkorn (which nearly went extinct!) really shines in my historic recipe for Traditional Irish Soda Bread.

Of course, you are free to use whichever all-purpose flour you have on hand.

Do not use cake and pastry flour as it is too light for this recipe.

What Is Leaf Lard & Why Do I Want To Use It In My Baking?

Leaf lard is a traditional ingredient that has been used in baking and cooking for centuries. Bad science had us switching over to hydrogenated vegetable oils and shortenings but thankfully lard is making a come back into our kitchens.

Great news on multiple levels. Firstly, lard is a monosaturated fat and it is incredibly nutritious and a source of numerous minerals, B-vitamins, and also one of the few food sources of Vitamin D3 — something we all need more of in our diets, especially in the colder months.

For everyday cooking my oil of choice is lard, and for baking, I always reach for a jar of leaf lard which is fat from around the pig's kidneys and loin. It is completely neutral in taste, you won't notice anything but an incredibly moist and beautiful crumb.

By the way — lard makes for a moister cake than butter and although you can use butter (or shortening or neutral coconut oil) if you want — I HIGHLY recommend leaf lard, you will be very impressed with the results if you have never baked with this superfood before.

By the way, you can use regular lard too as long as it is not browned lard or overcooked to the point where it smells like bacon. That type of lard is great for cooking or savoury meat pies but it won't work here.

I use regular lard in desserts with no problems and a pumpkin spice bundt cake like this is especially appropriate.

You can use either/or and I don’t think it makes a difference. I love the convenience of a high-quality organic canned pumpkin purée.

But if you want to make your own from fresh pumpkin understand that not all pumpkin is suitable to the task.

You have to source sweet culinary eating pumpkin varieties like Sugar Pumpkin or similar.

The bins of large, bright orange pumpkins that are everywhere are actually not intended for baking like this nor are they suitable for this recipe. So save those for pumpkin carving, decor, and feeding your chickens and poultry.

I will spare you clicking onto another page and just give you the gist of making your own pumpkin puree from fresh pumpkins:

Take your fresh Sugar or other culinary pumpkin varietal and cut it in half or quarters.

Scoop out the seeds and stringy center until just the firm walls of pumpkin flesh remain and are largely free from debris.

Roast on a baking sheet in an oven preheated to 400º Fahrenheit for approximately 1 hour until the flesh is easily pierced with a knife.

Scoop out the flesh with a spoon and then process in a blender or food processor until smooth and free of lumps.

When cooled you can use it in this recipe.

And that is literally it. 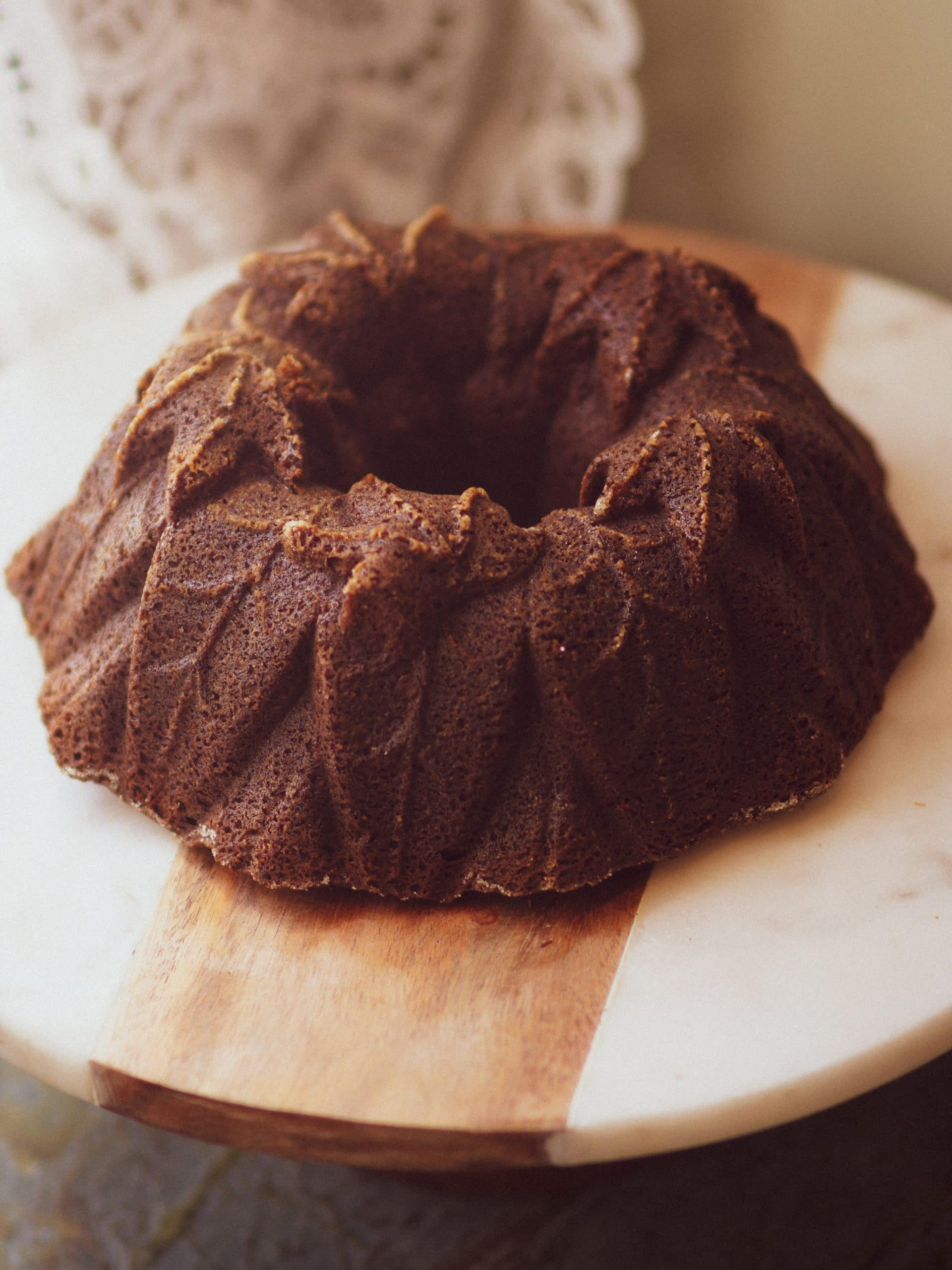 This pumpkin spice bundt cake comes together so quickly and easily that you will want to make it again and again.

With a hand or stand mixer cream sugar, vanilla extract and lard (or butter or oil but preferably lard) then add the eggs one by one.

Mix in the pumpkin purée.

In a separate bowl whisk together all the dry ingredients before slowly adding them into the wet ingredients.

Grease Bundt pan with lard or butter and coat with granular sugar (better than flour!) before adding batter.

Make the glazes as the cake cools and either serve on the side or drizzle on top of the bundt cake.

Hint: grease your bundt mould after the batter is thoroughly mixed and immidietly before you add it to the pan. This keeps it from dripping down the sides and pooling in the bottom. 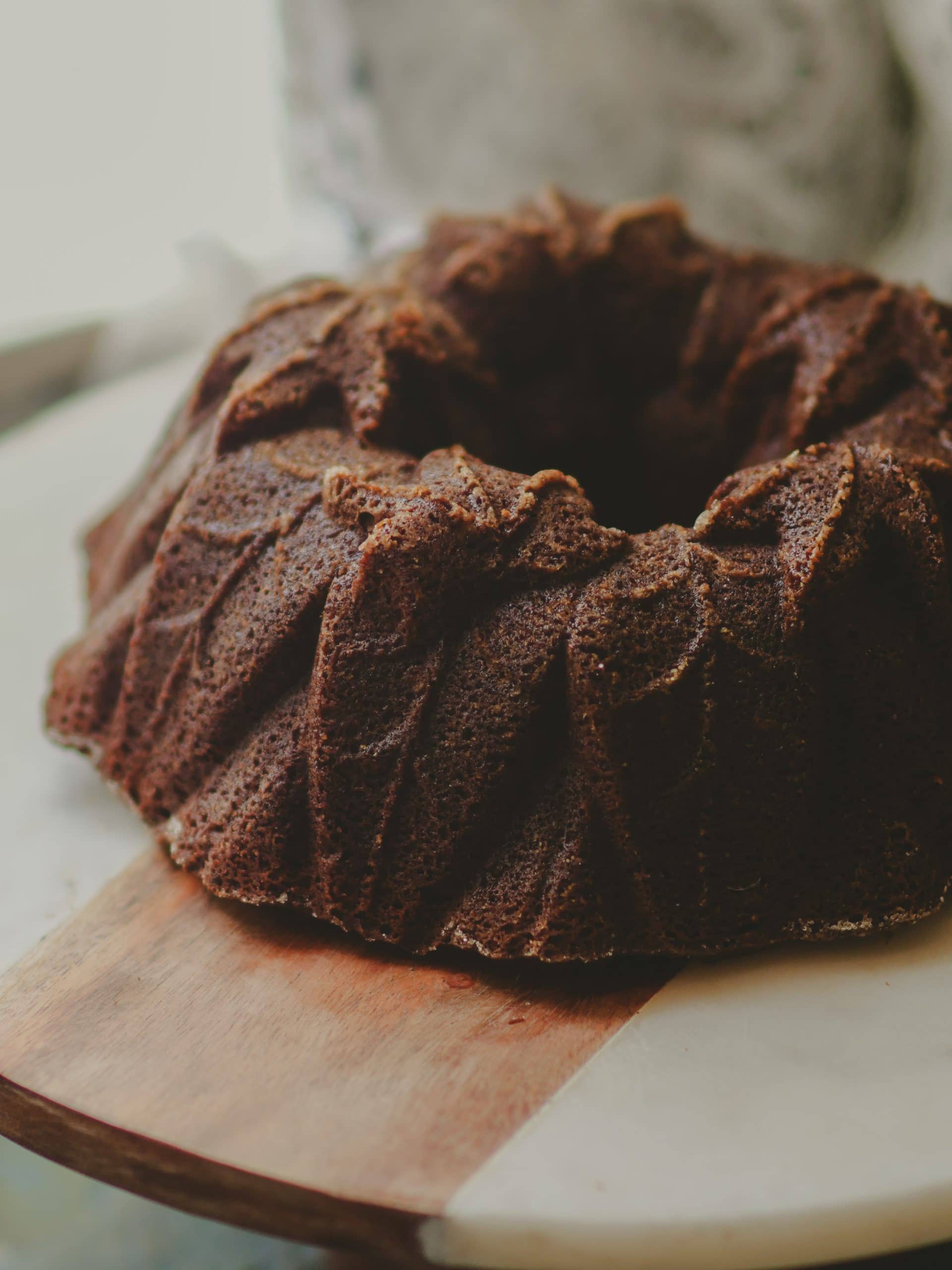 The most important piece of equipment is the bundt pan.

Unlike my old-fashioned fresh apple cake which has a very thick, shaggy, dough that doesn't do well with intricate moulds — this pumpkin spice bundt cake is perfect for them and an excuse to get fancy and use something like this Nordicware Harvest Leaves Bundt Pan.

Nordicware was the first and remains the best Made In USA maker of bundt pans. I collect them as they are basically lifetime and beyond pieces.

This cake can be stored on your countertop safely for 2-3 days as long as it's wrapped or stored on a cake stand underneath a dome.

However, I do not recommend the cream cheese glaze be left out for extended periods.

The cake can also be baked ahead and frozen for up to 3 months without any noticeable change in taste, texture, or quality. As long as it is securely and thoroughly wrapped. This would be a great way to get ahead of your Thanksgiving or Christmas baking as the glaze topping comes together in minutes.

Make this pumpkin spice bundt cake at a later time.

Prep Time: 10 minutes
Cook Time: 1 hour
Total Time: 1 hour 10 minutes
This is my favourite pumpkin cake. It is just so delicious, so moist, and so beautiful and I think you will agree after trying it yourself. Popular seasonal spices like cinnamon and nutmeg make for the perfect autumn dessert and this cake recipe is impressive enough for your holiday Thanksgiving or Christmas dessert tables too. In my version TWO glazes are made and served on the side (vanilla and cream cheese!) but you can easily drizzle the frosting or glaze on top if you wish.

1. With a hand or stand mixer cream sugar, vanilla extract and lard (or butter) then add the eggs one by one. Mix in the pumpkin purée.

2. In a separate bowl whisk together all the dry ingredients (flour, baking soda, cinnamon, nutmeg, cloves, ginger, salt) before slowly adding them to the wet ingredients and continuing to slowly mix until everything is thoroughly incorporated. Do not over mix, just until it's all combined.

3. Grease Bundt pan with lard or butter and coat with granular sugar (better than flour) before adding batter. Bake at 350° for about 60 minutes or until a toothpick inserted in the center comes out clean.

4. Once out of the oven, allow the cake to cool inside the bundt pan for 20-30 minutes before turning it out onto a wire rack to cool completely. This can take up to 2 hours but make sure not to add any glaze on top of the cake until it is completely cooled or it will just melt into the cake.

Make the Vanilla Glaze: Whisk 3 tablespoons of melted butter and 3 tablespoons of milk with 1.5 cups of powdered sugar and 1 teaspoon of vanilla extract. Once fully incorporated pour over the cake once it is completely cooled or serve on the side. Make thinner with more milk if desired.

Make The Cream Cheese Glaze: with a hand mixer beat the cream cheese until very smooth and then add in the powdered sugar, vanilla extract, and milk. Make thinner with more milk if desired.

Store the glazes in airtight glass containers like mason jars until ready to use if serving on the side.