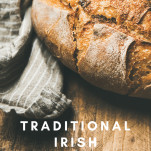 After making cultured butter you will be left with a quantity of buttermilk — the perfect amount for making a family-sized loaf of authentic and traditional Irish soda bread. My recipe is adapted from the first historical reference to Irish soda bread, uses ancient grain einkorn wheat, and the flour is first soaked in buttermilk overnight. This is a simple, wildly flavourful, and unique recipe for homemade bread right out of history. 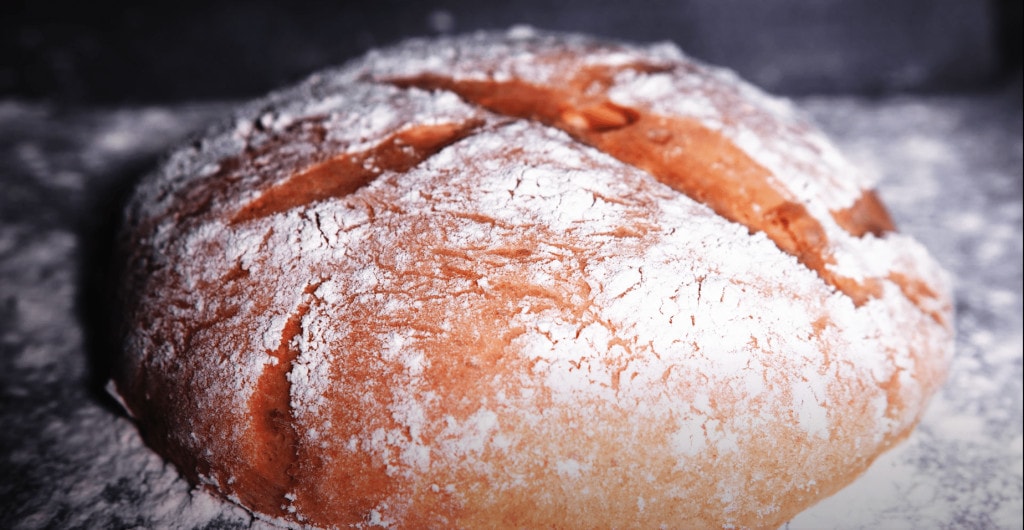 A few days ago I posted a recipe and video demonstrating how to make homemade traditional European-style raw cultured butter (or sweet cream butter) and then traditional Irish soda bread from the leftover buttermilk with einkorn wheat that is first soaked overnight. You can watch it below for the whole process. 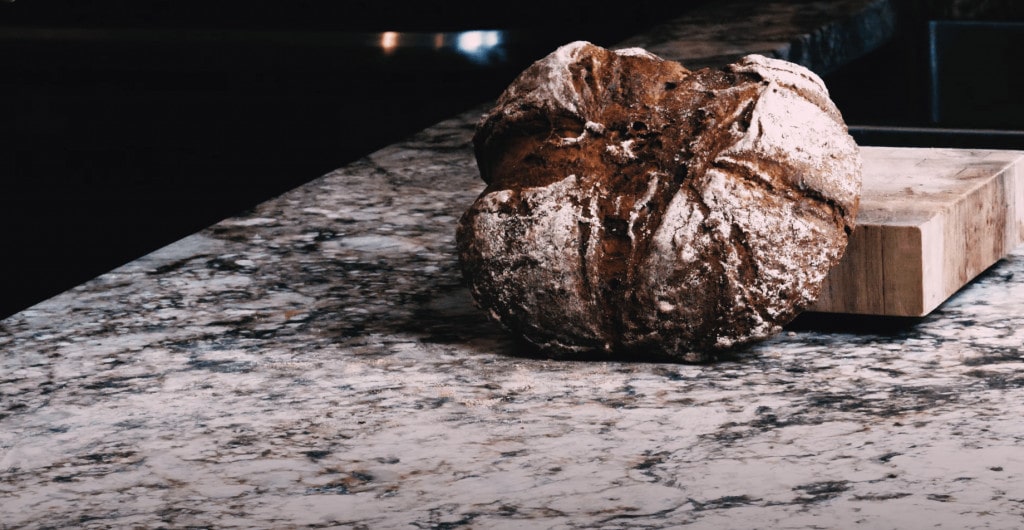 When I choose to eat grains, I aim to soak or ferment them first. This practice has traditionally been carried out by multiple cultures around the world — not so much anymore, unfortunately. And the science backs it up. All grains and legumes contain phytic acid, an organic acid which blocks mineral absorption in your gut. Soaking can neutralize this acid and also break down gluten which is very difficult to digest for many people and downright dangerous for celiacs.

Grains are transformed into something more digestible and also more nutritious.

I set out to make traditional Irish soda bread from the leftover cultured buttermilk that remans from making butter, and so I decided to soak my einkorn flour overnight first in the raw buttermilk as an experiment.

[perfectpullquote align="full" bordertop="false" cite="" link="" color="" class="" size=""]I based my recipe off of the first written reference we have to Irish soda bread dating back to 1836 (which I found on the website for The Society for the Preservation of Irish Soda Bread), although the bread itself has obviously been made for much, much longer and has a fascinating and sad history linked inextricably to Irish poverty and oppression.[/perfectpullquote]

It’s a fascinating process, one that would not pass modern food safety standards by any stretch — especially for a pregnant woman who is constantly warned away from “dangerous” (and traditional and nourishing) foods.

First of all, to make the cultured butter that I demonstrate in my video, I first left the cream out at room temperature for 24 hours. That’s all that culturing means — letting the natural, good bacteria found in raw milk to flourish at the proper temperature. Next, after making the butter, I soaked the flour (covered and also at room temperature) for an additional 16ish hours in the leftover cultured buttermilk. All in all, I kept raw dairy at supposed “dangerous” temperatures for almost two days.

The next day the einkorn flour was lumpy, unformed, partially wet and sticky — as I had hoped.

I dissolved the baking soda in water and added it to the flour before folding the bread only a few times, “blessing” it with the traditional cross shape cut into the top, and then quickly getting it into a preheated covered French oven at 500° Fahrenheit for 30 minutes. Uncovered for an additional 5-10ish minutes, the bread went from a pale colour to a deeply browned loaf with a crusty exterior and moist, dense interior.

The flavour was lovely, especially with the homemade butter. As complex as sourdough but distinctly different. I will definitely make this again.

See for yourself how easy this authentic Irish soda bread is to make. Yes, it's a long process, but a very satisfying one and the vast majority is entirely hands-off. Butter comes together in minutes really, and Irish soda bread requires almost no work — it's not even kneaded but rather folded a few times as kneading would hinder the rise. 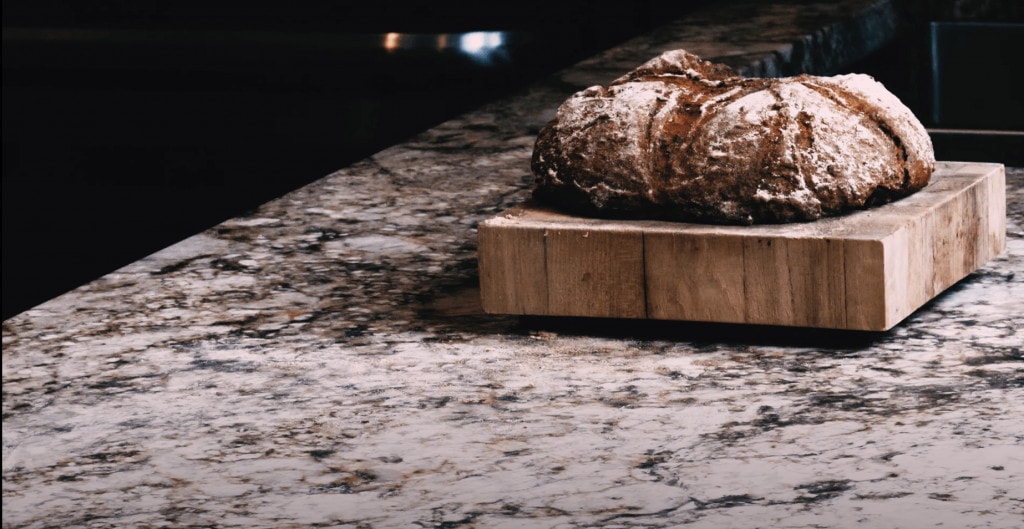 What Is Irish Soda Bread?

Traditional Irish soda bread is made with only 4 ingredients: wheat flour, buttermilk, salt, and baking soda.

No yeast is needed for this bread.

There is nothing wrong with adding your own additional ingredients like herbs or spices, but if I always recommend that when making a traditional recipe for the first time, to stick to the tradition. And my version is a traditional as it gets — we'll be using an ancient grain, einkorn wheat and raw buttermilk leftover from butter making.

Actually, soda bread is the perfect thing to make after butter making as the amount of buttermilk left after making 1 lbs of butter is just the right quantity for one nicely-sized loaf of soda bread for a family (or couple, or individual — soda bread keeps very well).

The flour will be soaked in the buttermilk overnight which makes for a much more nutritious and easier to digest bread while further culturing the buttermilk at the same time.

The Origins of Irish Soda Bread

Irish soda bread is a variety of "quick bread" or bread that doesn't use yeast. In soda bread, the baking soda reacts with the lactic acid in the buttermilk to produce tiny bubbles of carbon dioxide which force the bread to rise.

Traditional Irish breads were flatbreads cooked on griddles as the domestic flours of Ireland did not have the ability to rise even when combined with yeast. 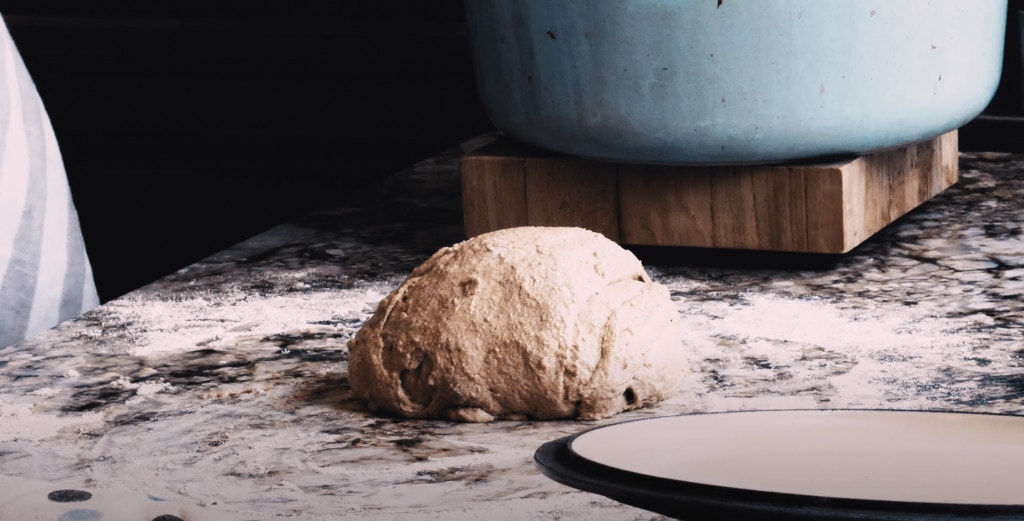 Using soda to leaven bread was not an Irish invention. That clever technique can be traced back to Native Americans in the 1800s. The Irish adopted that technique for leavening their own bread from necessity — the familiar necessity of poverty.

There is some interesting and tragically beautiful history between the indigenous peoples of North America and the Irish.

Standing today in Cork, Ireland (one of the most beautiful parts of that land) is this statue called "Kindred Spirits."

[perfectpullquote align="full" bordertop="false" cite="" link="" color="" class="" size=""]Kindred Spirits stands in Cork, Ireland and commemorates the 1847 donation by the Native American Choctaw People to Irish famine relief during the Great Hunger, despite the Choctaw themselves living in hardship and poverty and having recently endured the Trail of Tears.[/perfectpullquote]

It was created by Alex Pentek at the Sculpture Factory in Cork, Ireland, with assistance from students of the Crawford College of Art and Design, and installed in Bailick Park in 2015.

I won't go into the devastating history of the potato blight and the Irish Famine (or the Trail of Tears for that matter) that killed over 1 million people and saw a million more leave their homeland forever.

I won't go into systemic genocide and oppression. But we can't speak of soda bread or of Irish cuisine without mentioning it, however briefly, as the culinary history of each people is intertwined with the socio-political and economic realities of the times as well.

[perfectpullquote align="full" bordertop="false" cite="" link="" color="" class="" size=""]"A correspondent of the Newry Telegraph gives the following receipt for making " soda bread," stating that "there is no bread to be had equal to it for invigorating the body, promoting digestion, strengthening the stomach, and improving the state of the bowels." He says, "put a pound and a half of good wheaten meal into a large bowl, mix with it two teaspoonfuls of finely-powdered salt, then take a large teaspoonful of super-carbonate of soda,% dissolve it in half a teacupful of cold water, and add it to the meal; rub up all intimately together, then pour into the bowl as much very sour buttermilk as will make the whole into soft dough (it should be as soft as could possibly be handled, and the softer the better,) form it into a cake of about an inch thickness, and put it into a flat Dutch oven or frying-pan, with some metallic cover, such as an oven-lid or griddle, apply a moderate heat underneath for twenty minutes, then lay some clear live coals upon the lid, and keep it so for half an hour longer (the under heat being allowed to fall off gradually for the last fifteen minutes,) taking off the cover occasionally to see that it does not burn. "  This, he concludes, when somewhat cooled and moderately buttered, is as wholesome food as ever entered man's stomach.  Wm. Clacker, Esq., of Gosford, has ordered a sample of the bread to be prepared, and a quantity of the meal to be kept for sale at the Markethill Temperance Soup and Coffee Rooms."[/perfectpullquote]

This same exact story was repeated in English and American newspapers and magazines over the next few years so it is possible that the Farmer's Magazine reprint may not be the first one.  It is, however, the only documented copy discovered so far.

If you know of a reference prior to 1836, please let the society know over at their website which delves deeper into the history of Irish soda breads while also providing many more recipe variations and other interesting tidbits.

Visit The Society For The Preservation Of Irish Soda Bread. 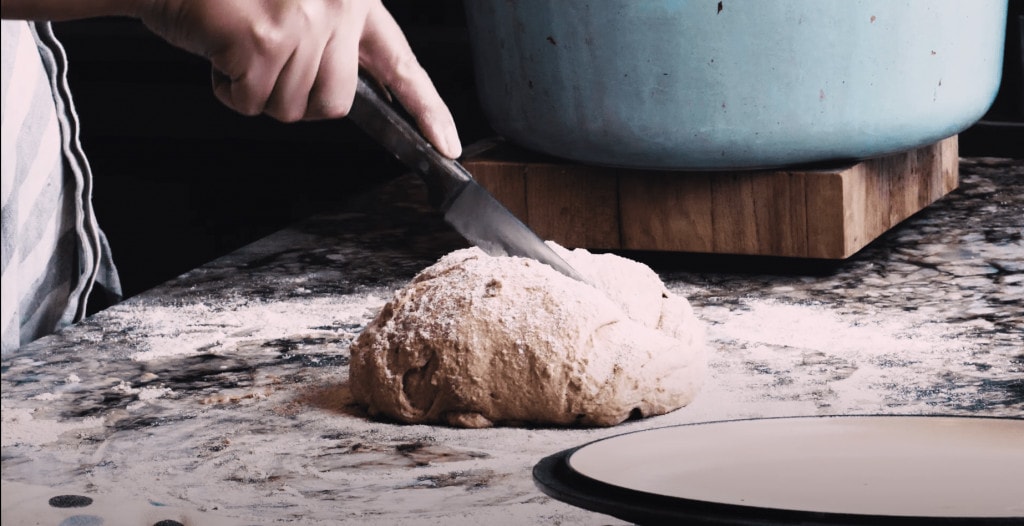 What Is Einkorn Wheat

Einkorn wheat was the very first wheat domesticated by humans many thousands of years ago. It has never been altered or hybridized in all that time and it nearly went extinct as modern wheat is much easier to grow, has higher yields, and thus is more profitable.

Einkorn is much more nutritious than modern wheat varieties and also more flavourful. Non-celiacs who find gluten to be difficult to digest, frequently find that they have no problems with einkorn wheat. Soaking the flour makes this even more apparant.

I highly recommend this book to get you started on baking with einkorn wheat: 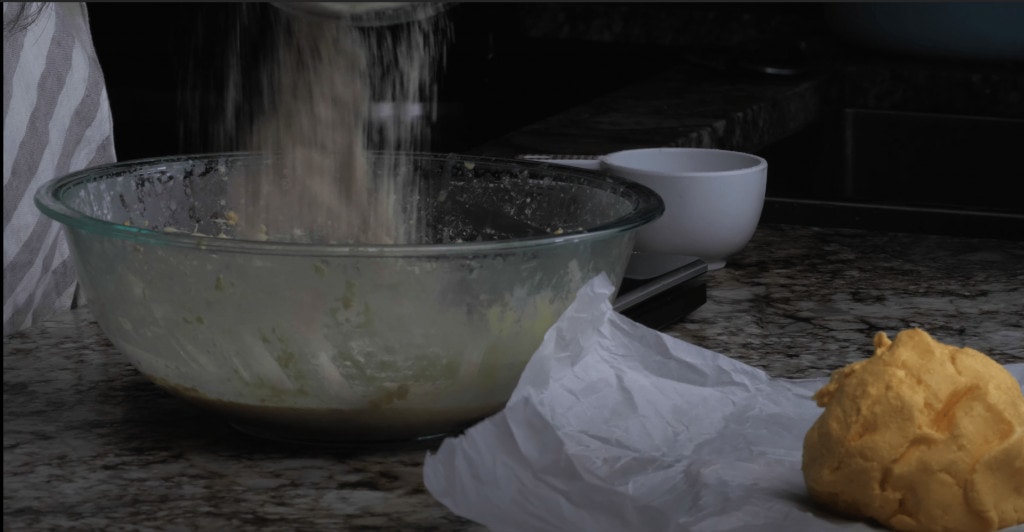 Why Do We Soak Grains?

Soaking your grains will make the resulting bread easier to digest as some of the anti-nutrients naturally found in grains will be broken down.

It will also further culture your raw buttermilk.

If you're using raw buttermilk, leave your bowl of flour and buttermilk on the counter overnight. If you're using pasteurized buttermilk I would recommend soaking it overnight in the refrigerator and then letting it come to room temperature for a few hours the next morning. 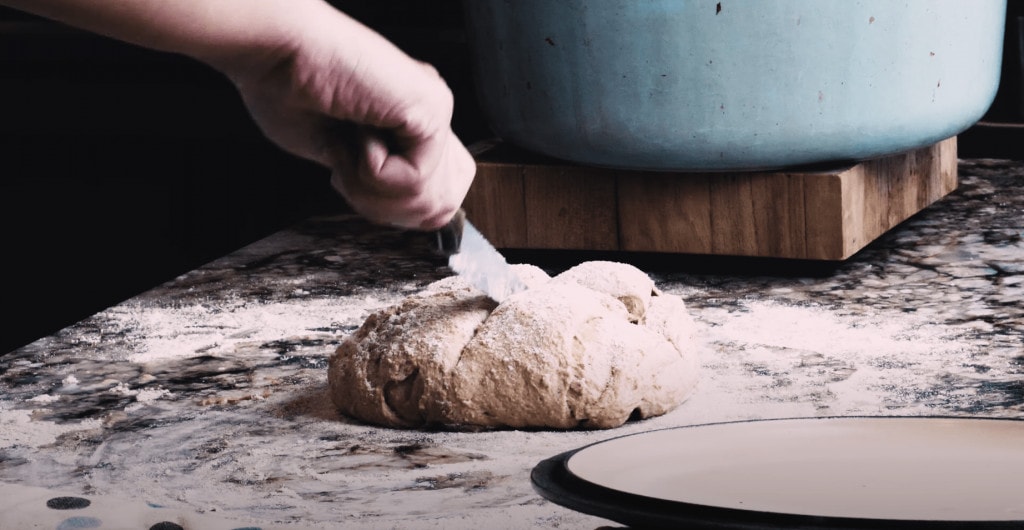 Where To Find Einkorn Wheat Flour

There are only two brands of einkorn flour that I have ever used, both are organic, and I recommend them both wholeheartedly. There are of course other brands out there, so do your research and experiment if you wish. 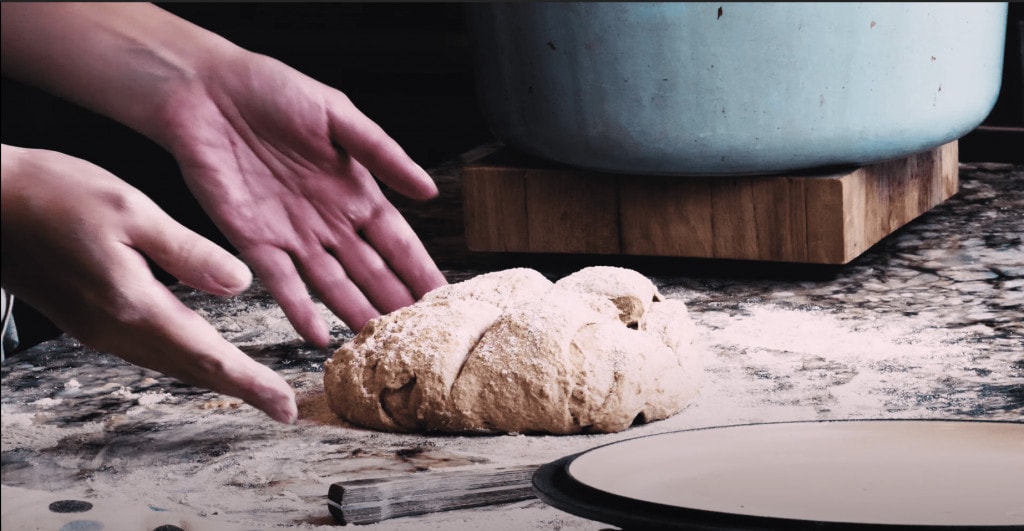 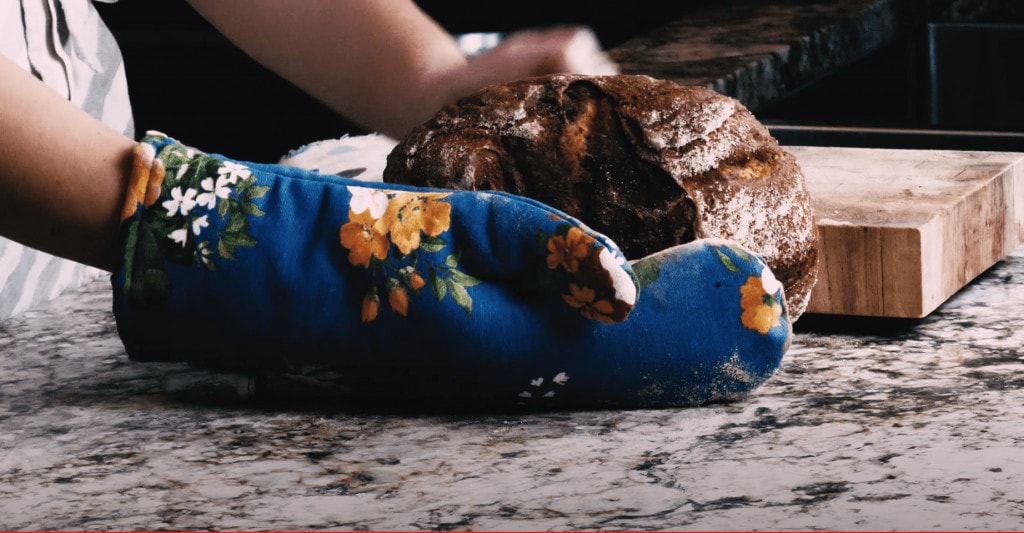 Are There Substitutes For Traditional Buttermilk?

Yes. You can sorta sour your own milk and make something akin to buttermilk that will work quite well in this recipe but not be ideal.

Here are 14 Great Substitutes for Buttermilk 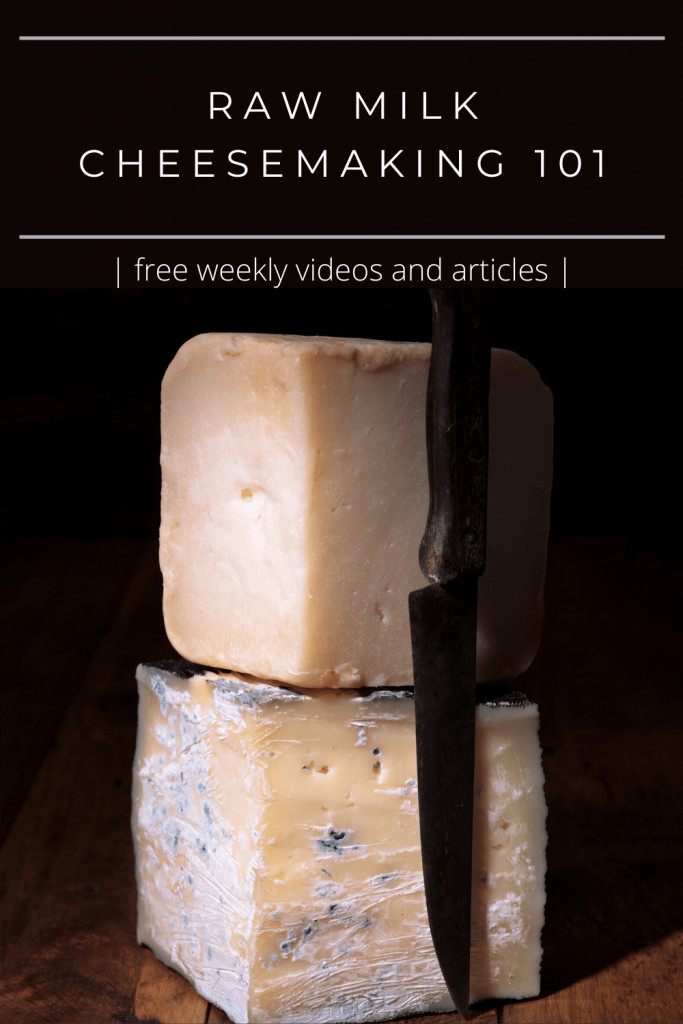 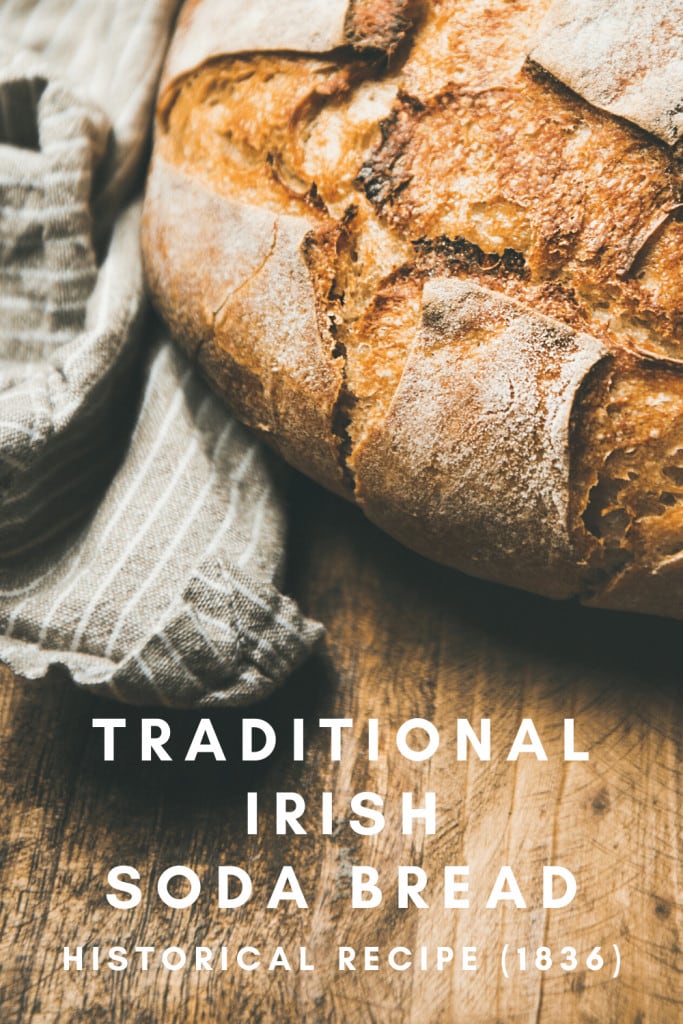 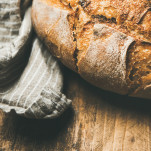 After making cultured butter you will be left with a quantity of buttermilk — the perfect amount for making a family-sized loaf of authentic and traditional Irish soda bread.

In Raw Milk Cheesemaking Part 2, we made traditional raw cultured butter. The leftover buttermilk from that process was then used to make this Irish soda bread.

My recipe is adapted from the first historical reference to Irish soda bread, uses ancient grain einkorn wheat, and the flour is first soaked in buttermilk overnight. This is a simple, wildly flavourful, and unique recipe for homemade bread right out of history.

Hi, I'm Jana! The Peasant's Daughter is a journey through the recipes and stories of the women who came before me. I'm a new mom and new homesteader who left the city life behind for a rural country life of more peace and simplicity. We're renovating an 1860's Victorian farmhouse and I'll be sharing real-food, nutrient-dense recipes (almost) always made from scratch. Follow me along in my new country life as I raise and grow our food, and strive for more freedom and self-sufficiency.

We use cookies to ensure that we give you the best experience on our website. If you continue to use this site we will assume that you are happy with it.Ok