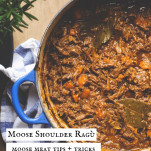 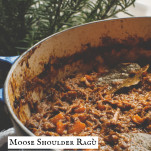 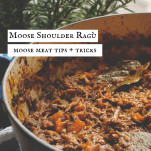 My recipe for moose shoulder ragù and some essential tips and techniques when working with moose meat in the kitchen. This rich and savoury sauce can be eaten on its own like a stew or served atop pasta, potatoes, squash, or polenta. The moose shoulder can be substituted with other tougher cuts of venison or even just beef.

A moose shoulder recipe ragù that transforms a tough cut of meat into something meltingly tender, savoury with a hint of sweetness that is so very rich and satisfying.

This is a low and slow recipe that simmers for a long time to get the desired results and requires some advanced planning too, but it is mostly hands-off and very simple in execution.

I got my first crack at moose shoulder recently, and I was very obsessed with doing right by the deep red-coloured, tough cut of wild meat I was fortunate enough to be gifted with.

Like the ruffed grouse I previously got to experiment with, I was scared of messing up.

I figured a traditional stew or ragù recipe would be a safe choice to make use of this cut. It was important to me that I could taste the meat — that the recipe didn't seek to cover it up in any way. I thought of doing a moosey version of coq au vin, but then I settled on my own variation of a traditional Osso Bucco type preparation instead.

The Difference Between Ragout & Ragù

Okay, so what is ragù? And how does it differ from ragout, if at all?

In Italian cuisine, ragù is a heavily meat-based sauce that is commonly (but not always) served with pasta.

The Italian culinary society, Accademia Italiana Della Cucina, has documented several ragù recipes — Bolognese being a popular variation of ragù and probably the most well-known around the world.

A lesser-known ragù variation is something like Ragù alla Barese which is also sometimes made with horse meat.

Alongside the meat, other commonly shared characteristics of ragù can include: minced vegetables like celery, carrot, and onion, diced pancetta, some amount of tomato sauce, white or red wine, beef bone broth, and occasionally milk and/or cream. But these are not hard and fast rules and depend on the recipe and tradition.

The etymology of ragù is from the French ragoût and it seems to have reached Italy in the 18th century. The Italian tradition of meat-based sauces goes back considerably further than that, but they were not called ragù nor was there any particular tradition of serving these meaty sauces with pasta.

Ragout is actually incredibly similar, beyond being pronounced the same. Ragout is regarded as more of a stew, and although it is frequently heavily meat-based, it can also be made of fish or even all vegetables (although bone broth would still be a classic component).

Ragout can be eaten on its own or with other sides and accompaniments, whether they be pasta, bread, potatoes, polenta etc.

And both terms are derived from the verb ragoûter, which means “to stimulate the appetite” which gives us a big hint that this type of dish is intended as the first or second course, after the soup course.

To me, it seems that the primary difference is that ragù is considered as a pasta sauce whereas ragout is seen more like a stew, although looking at the culinary history, this seems to be a relatively recent distinction making it more a culinary splitting of hairs.

I called my recipe, a moose shoulder ragù, although you can see in my photos I'm serving it with Blitva (a traditional Croatian potato dish) which would technically make it a ragout? Especially since I mostly ate the rest of it on its own?

But the meat is shredded more like a ragù? And you could easily serve this with pasta if you wanted?

You know what? Whatever.

While it doesn't prompt as many comparisons to grass-fed beef, it is mild and easily approachable. The flesh is heavily grained and coloured a deep rich red. It is generally a tougher, chewier meat than whitetail deer. It's a good practice to age your moose meat for a week or so before butchering. If you can't do that, you can let your butchered cuts rest in the freezer for a few months. You'll find that the meat gets better and better as time goes by.

While the meat was frozen, I didn't know if the moose shoulder was aged so I kept it in the freezer for another week.

Would it be enough time? I figured that letting it fully defrost and then dry-brining with a heavy salting would be the best course of action.

Salting or Dry-Brining Your Meat In Advance

I do this with all meat as soon as I bring it home, but it is especially important for a tough cut like a moose shoulder.

All you need is kosher salt.

I recommend dry-brining three days in advance for this recipe, but 24 hours will do.

Dry-brining is superior to wet-brining and the benefits go beyond simply giving the meat a more deeply flavoured seasoning. Dry brining gets deep into the proteins to dissolve and relax muscle fibres.

You can easily substitute many wild game meats for the moose shoulder used in this recipe.

I highly recommend a nice tough cut though because that type of meat really shines in a long-simmered recipe like this one.

Tough cuts of meat are loaded with collagen and require a long cook time to allow all that collagen and gelatin to slowly render and melt out into the stew or sauce. The end result is pure magic as these tough cuts when prepared correctly, are legitimately some of the absolute best.

So do not use lean or prime meat here. Do not use tenderloins and filets or backstraps. Use the gristly, tough, muscles from parts of the body that get a frequent workout.

With that said, feel free to use deer, elk, and even good old beef for this recipe if you don't have access to moose meat. Shanks or oxtail would be a lovely substitute.

Like other wild game and red meat, moose meat is a nutrient-dense source of so many different macro and micronutrients.

Like other red meat, moose is going to be packed with highly bioavailable protein and heme iron. Being a ruminant animal, the muscle meat is also going to be a tremendous source of Vitamin B12.

The organs like the liver will have a similar superfood nutritional profile of beef liver and be an incredible source of bioavailable Vitamin A in the form of Retinol (only found in animal foods) as well as Vitamin C (which is also highly concentrated in the brains of animals).

Moose shoulder will be a great source for collagen and glycine which is essential for joint and skin health, amongst other things.

The Omega 3 to 6 ratio will be optimal in moose meat, the way it is in pastured grass-fed cattle. Moose is also a great source for many B Vitamins, Vitamin D3, Phosphorous, and Potassium.

Moose living in pristine wilderness with access to their natural, wild diets are a great source for nutritious meat.

Pasta, polenta, squash or "zoodles" are nice, I like this moose shoulder ragù on its own, but I also recommend the following side dishes: 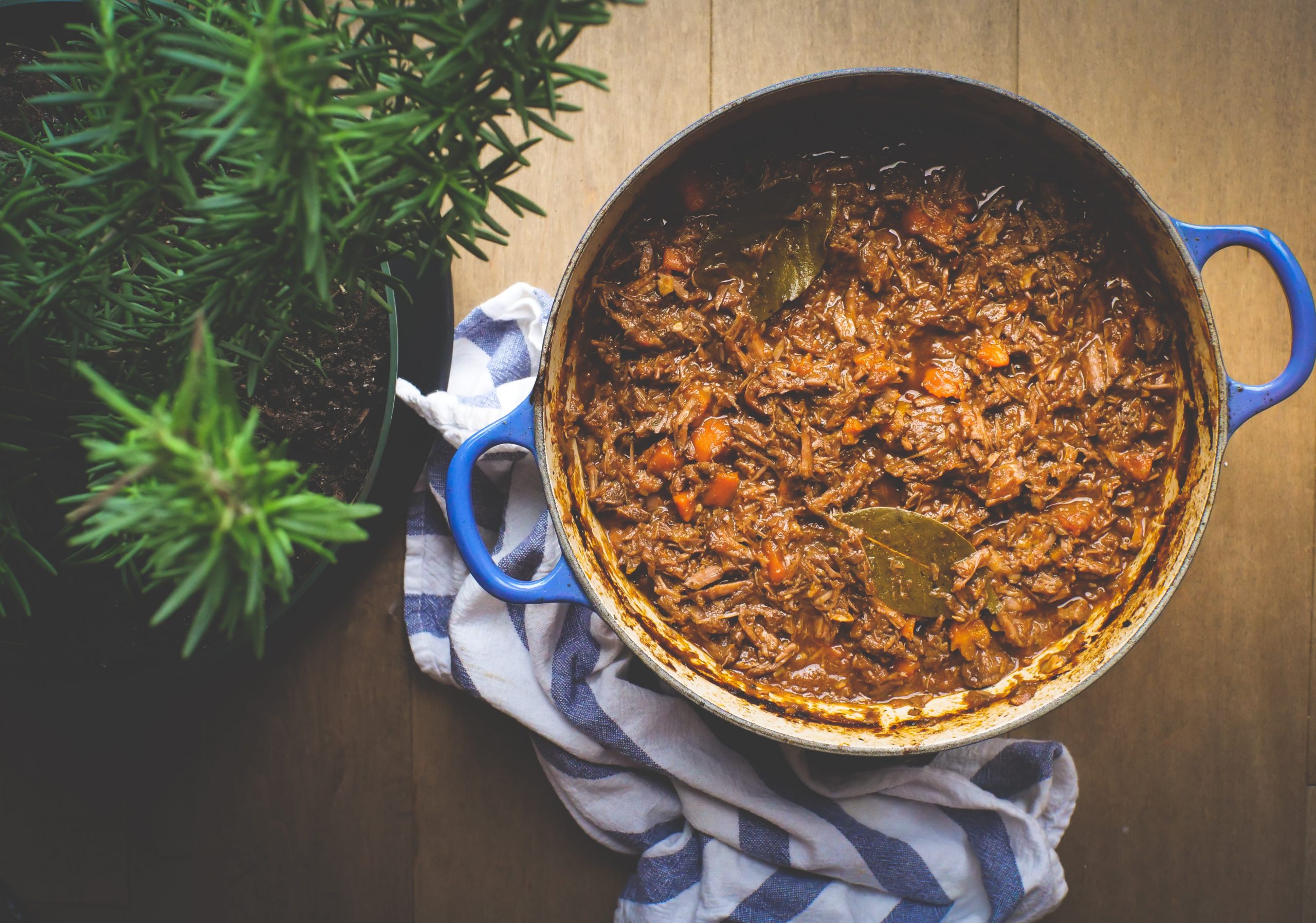 I highly recommend reading over the recipe notes for tips and tricks. My recipe for moose shoulder ragù. Read on for some essential moose tips and techniques and how to make this rich savoury sauce that can be eaten on its own like a stew or served atop pasta, potatoes, blitva, squash, or polenta. The moose shoulder can be substituted with other tougher cuts of venison or even just beef.
Print Recipe Pin Recipe Rate Recipe
Prep Time: 30 minutes
Cook Time: 4 hours
Course: Wild Game
Cuisine: Italian American
Servings: 12 servings
Author: The Peasant's Daughter

You can stir in peas at the very end of cooking if you wish.
Tried this recipe?Let us know how it was!
« Smoked Spicy Beef Jerky
How To Make Sour Milk {From Any Milk} »