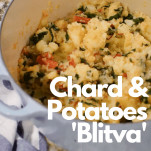 A hearty and traditional peasant dish from the Dalmatian peoples of the Croatian coast. Blitva is a combination of potatoes, chard, garlic, and olive oil that is a perfect autumn and winter accompaniment to any meal but also a great unique side dish for your holiday Thanksgiving and Christmas dinners. 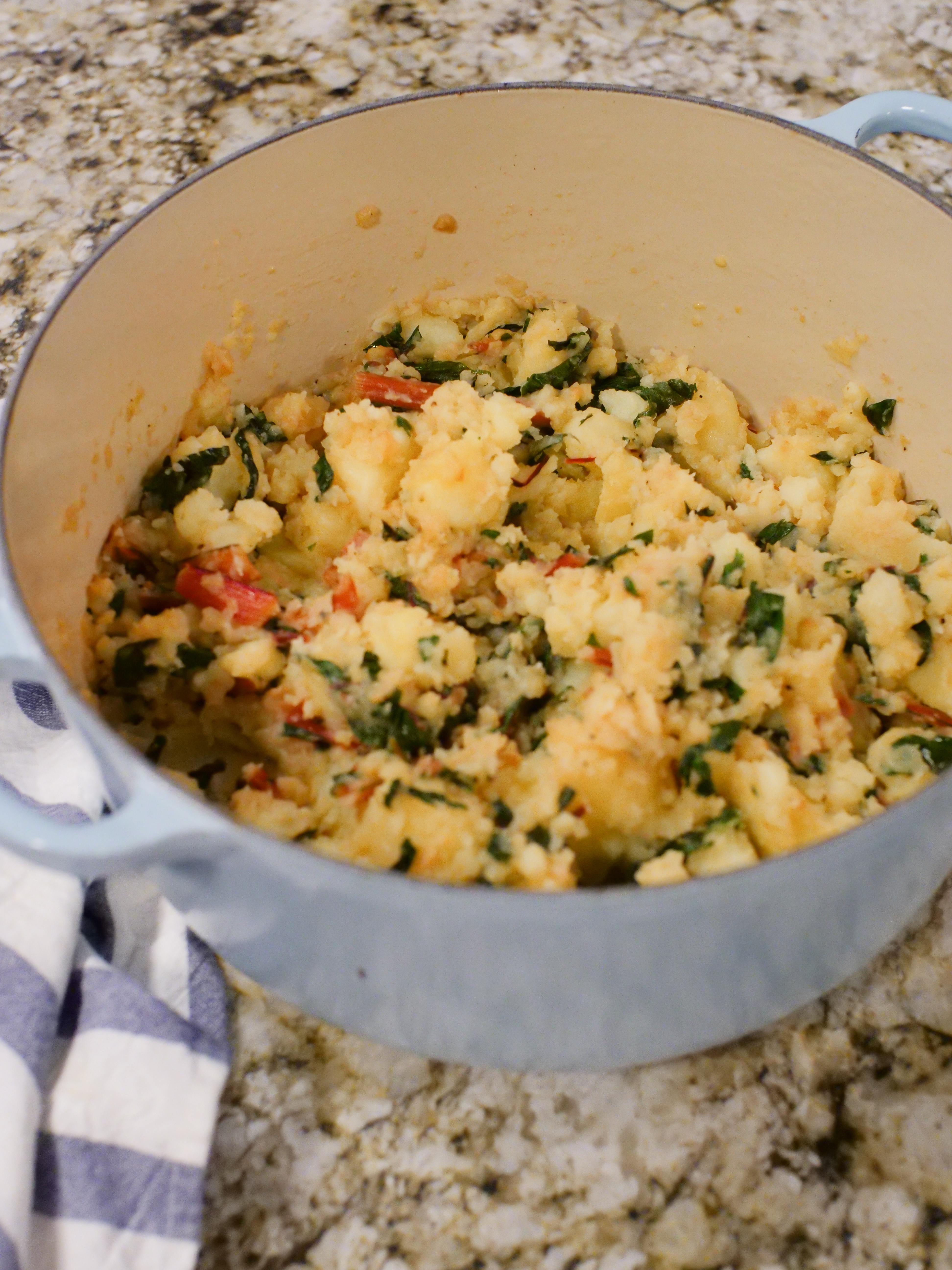 The Dalmatian people of Croatia love this hearty side dish of garlicky and buttery potatoes and swiss chard (or silverbeet). We call it blitva, which simply translates to chard. Chard is a frequently consumed green on the coast.

It is a simple dish, a rustic peasant recipe that is frequently served alongside pork, lamb and mutton, as well as grilled seafood dishes. For me, this is comfort food at its finest. As the hot summer sun gives way to cooler autumnal days, I crave these hearty recipes.

If the combination of swiss chard and potatoes seems odd or redundant to you, I beg you to reconsider. Give this simple recipe a try and I think I can get you on my side. I think this is a perfect side dish for you Thanksgiving an Christmas holiday dinners. 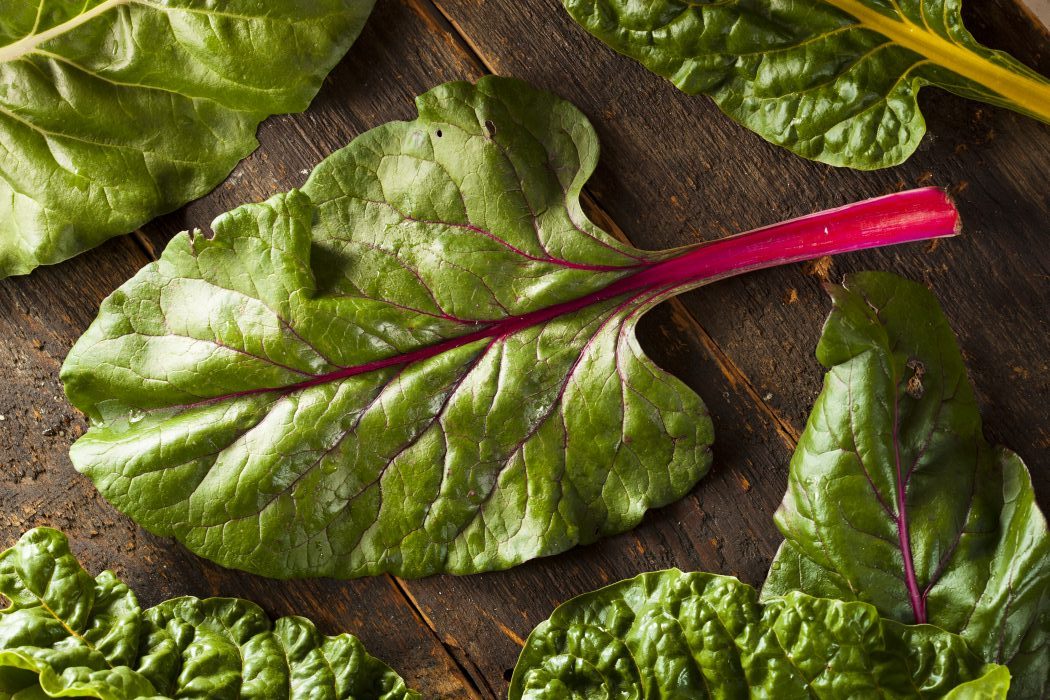 Is There A Difference Between Chard & Swiss Chard?

The word chard comes to us from the French word carde which refers to the artichoke thistle, or cardoon.

Chard became known as Swiss Chard to differentiate it from the native spinach which it bears a resemblance to. However, the origin of the adjective 'Swiss' a country where chard did not traditionally grow is unclear. It was likely attributed to a Swiss botanist being the first to describe the plant.

Chard is actually a member of the beet family, but it is grown for its stem and leaves instead, the root being inedible.

However, chard is much older than the beet. It was developed thousands of years ago from a form of wild beet which no longer exists.

The flavour of chard is quite similar to beet greens and of spinach. Chard can be quite bitter with a natural hint of saltiness. When grown in coastal regions like Croatia, the saltiness is quite apparent, a natural byproduct of the Adriatic sea and the thin coastal soils.

Much like kale and other dark leafy greens, chard is never (or at least not traditionally) eaten raw in Southern Europe, which is where chard comes from. That is a North American fad.

Rather those types of greens are added to dishes like this, but also soups and stews.

Cooking helps to draw out some of the unpleasant bitterness and oxalates while making the nutrients of the plant more bioavailable for humans, although some type of fat is also needed to get the full benefits of those nutrients.

There are many types of chard as well, all with beautifully coloured stems and green leaves. Use whatever chard you wish. 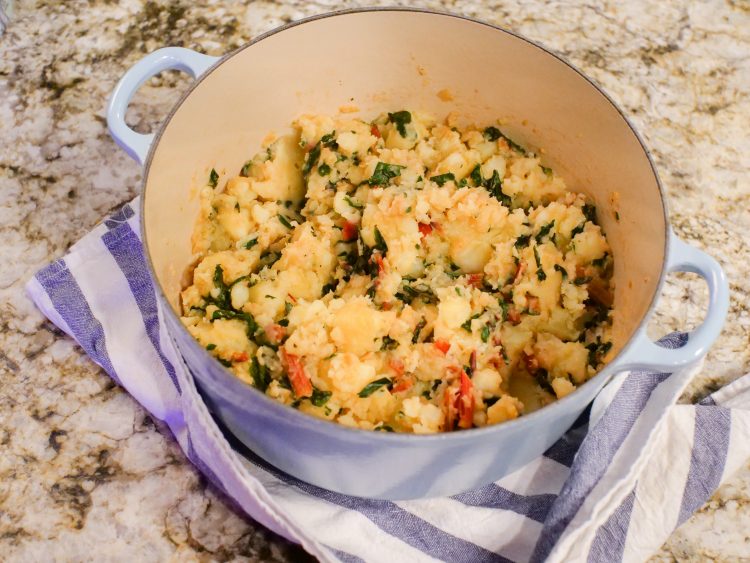 Swiss chard and potatoes served in this way, is one of the most common side dishes in Croatia.

If you travel through this country, you will be served blitva at some point.

Growing up, we frequently had this dish as it is hearty, filling, and cheap. My mother describes blitva as a common main course of her childhood. Her own mother made it with plenty of pork fat and whatever bits of bacon were available to a poor farming family of 10 people.

Eeking out an existence in a small village in post World War II Yugoslavia, you made do with what you had. My mother, being the youngest of the 8-children, had the roughest go of it where food portions were concerned.

Lard and olive oil (both traditional and frequently used Mediterranean cooking fats) are the typical fats that would be used in this dish.

However, if I'm making blitva as a side dish, I prefer a mixture of olive oil and butter.

If I'm making this recipe as a lazy main dish, I will use a mixture of olive oil and bacon fat, and then add crisped pancetta/guanciale on top.

Whatever you decide, do not use vegetable/soy or canola oils in this recipe. It will not taste good and you will wonder what all the fuss is about.

Once finished, hit the jumble of greens and potatoes with freshly ground black pepper and it’s ready to serve.  One of the beauties of a side like this is that it’s delicious served piping hot, but even better at room temperature.

Serve alongside schnitzel, sausage, pork. Add a sharp, vinegary to round it all out.

If you find yourself with leftover blitva in your refrigerator, you can make it into a cold potato salad to take to work.

Whisk together some vinegar and a bit of mustard, pour over top, and that is it.

Serve Blitva Alongside These Recipes:

If you have made this recipe or have any questions, let me know in the comments! 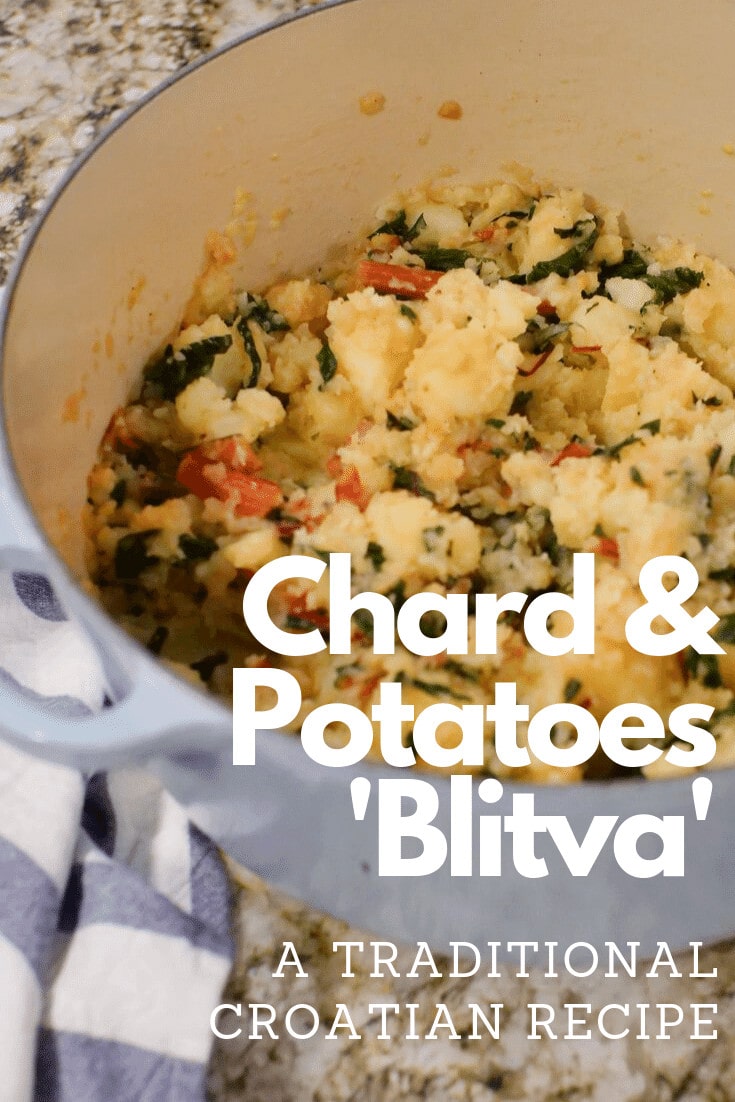 A hearty and traditional peasant dish from the Dalmatian peoples of the Croatian coast. Blitva is a combination of potatoes, chard, garlic, and olive oil that is a perfect autumn and winter accompaniment to any meal but also a great unique side dish for your holiday Thanksgiving and Christmas dinners. My recipe here makes enough for 8 people or for leftovers!
Print Recipe Pin Recipe Rate Recipe
Prep Time: 10 minutes
Cook Time: 30 minutes
Servings: 8
Author: The Peasant's Daughter