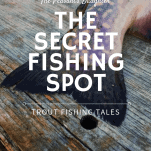 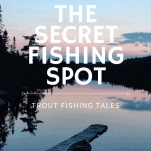 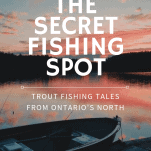 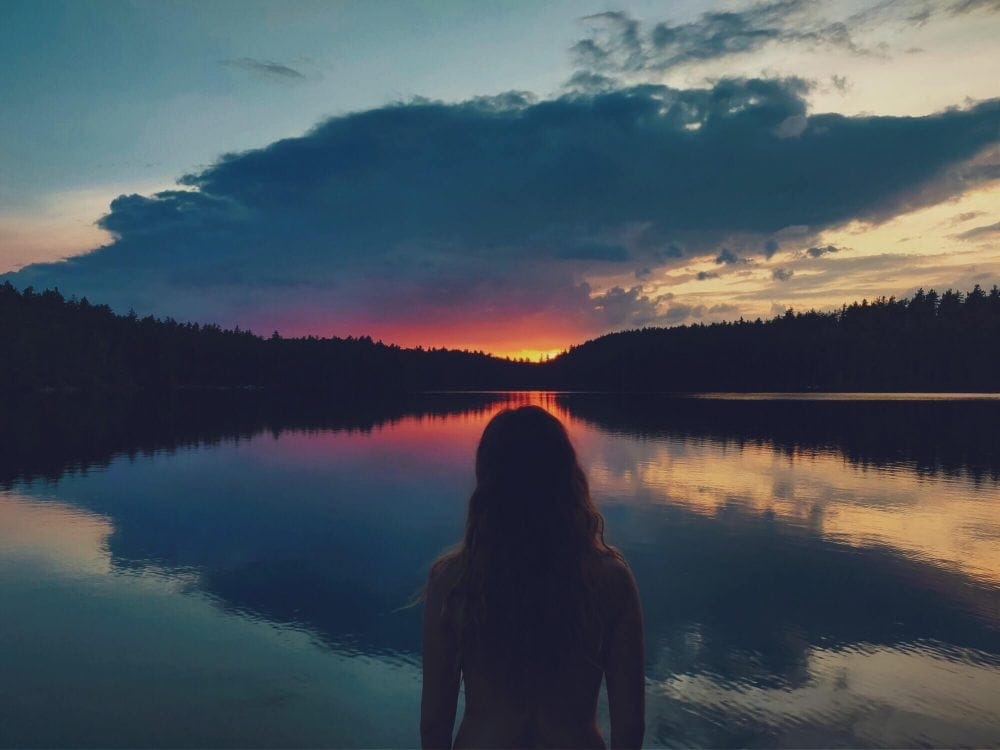 I can't tell you where in Ontario these lakes are. They are not my secret to share — I was brought here the first time myself. I had never heard of this place and I never could have imagined how magical it would turn out to be.

They lay some long hours from Toronto and require a bit of knowledge and some bushwhacking to find and navigate. You need quads and a trailer or a side-by-side. The area is dotted with lakes, creeks, streams of various sizes. Some are still unnamed. It's beautiful here. It feels wild and disconnected in a way I constantly search for.

Evidence of moose is everywhere, but rarely will you actually spot the shy giants. The earlier you wake up for fishing, the better the chances. As the sun rises higher they retreat to wherever they spend their time deep in the forests.

The lakes are teeming with trout: speckled trout (also called brook trout), rainbow trout, lake trout, and even splakes -- a hybrid crossing of a male brook trout and a female lake trout.

It is the speckled/brook trout that is most abundant.

Fishing is much more than fish. It is the great occasion when we may return to the fine simplicity of our forefathers. ~ Herbert Hoover 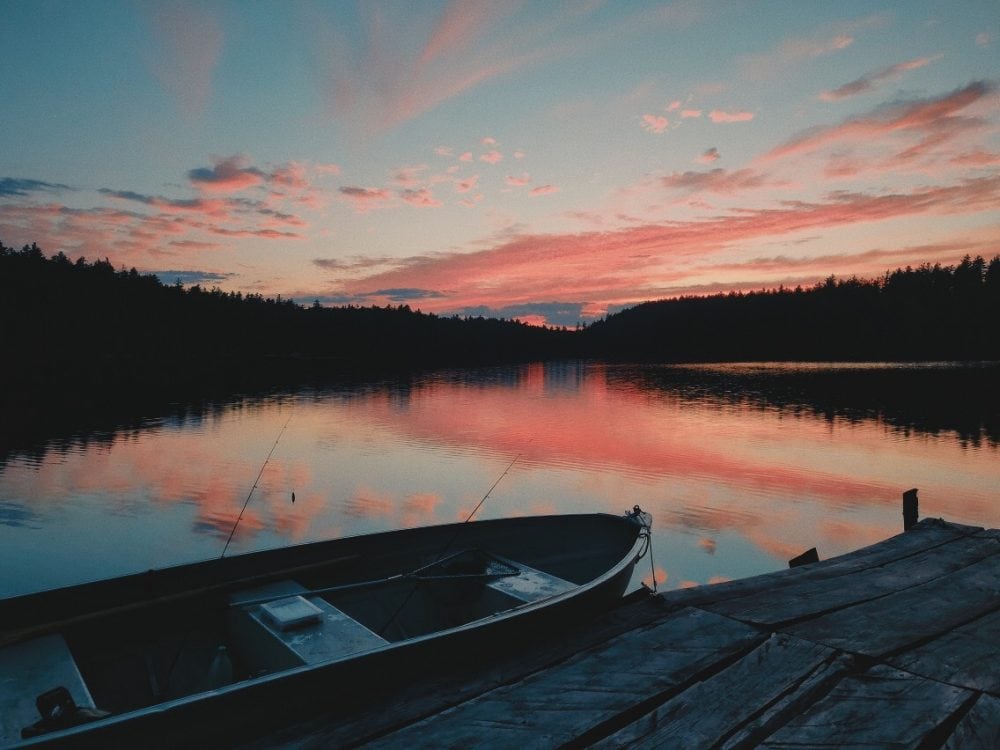 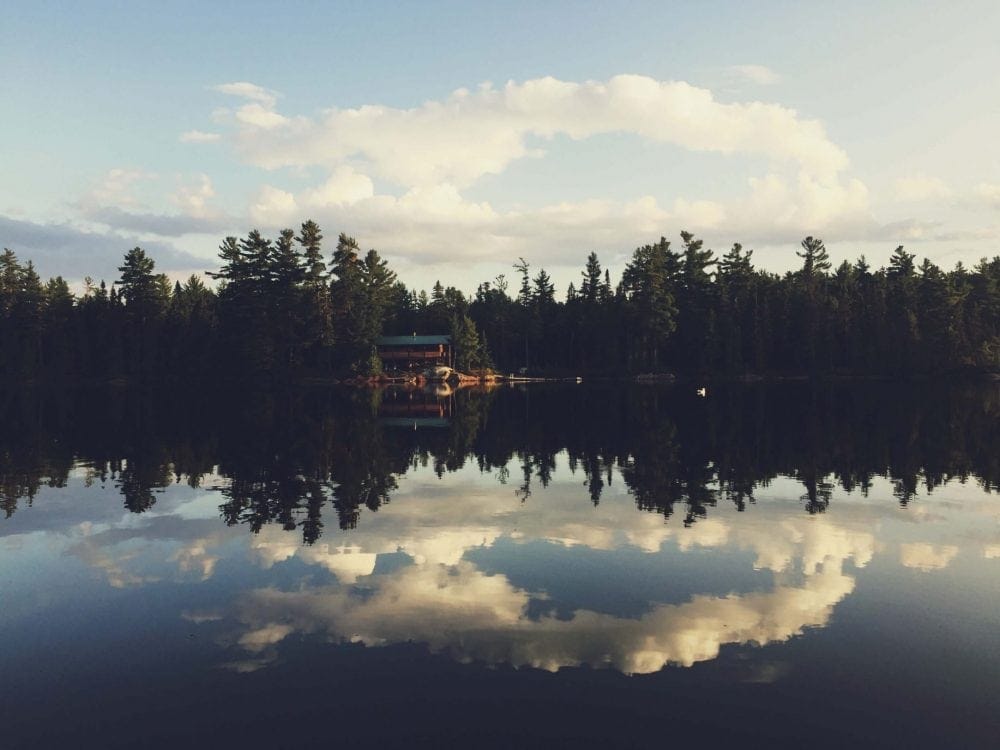 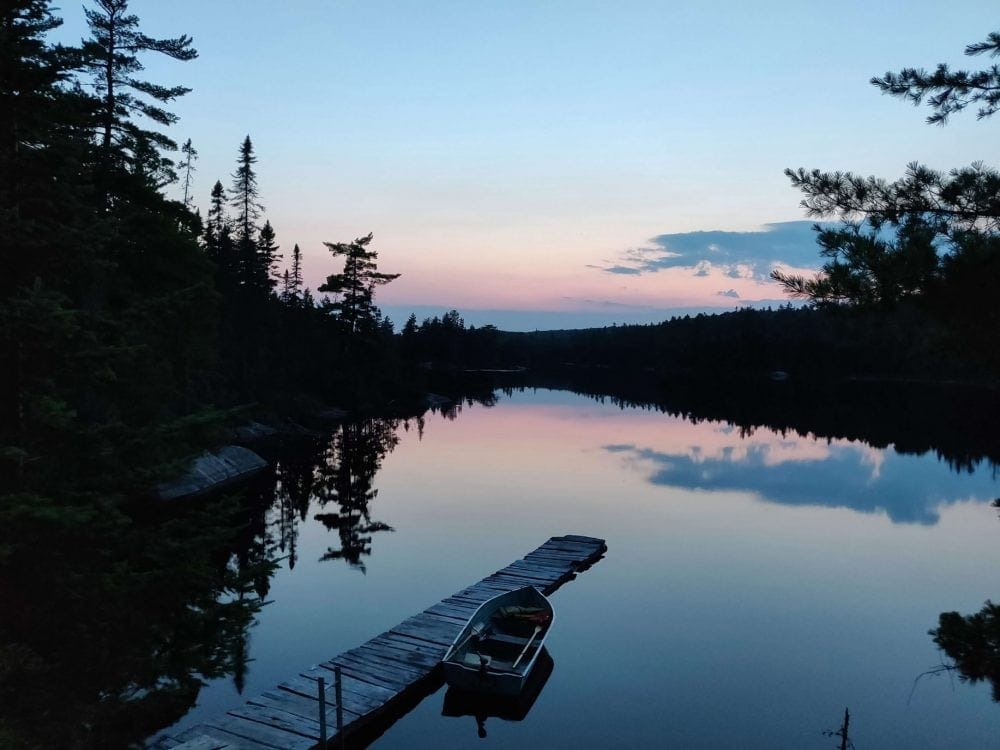 They are also some of the most beautifully marked fish. These specks of magenta, blue and silver. The bright orange bellies of males in the spawning season. The colours start to fade after they’re dead. The scales turning grey and common. 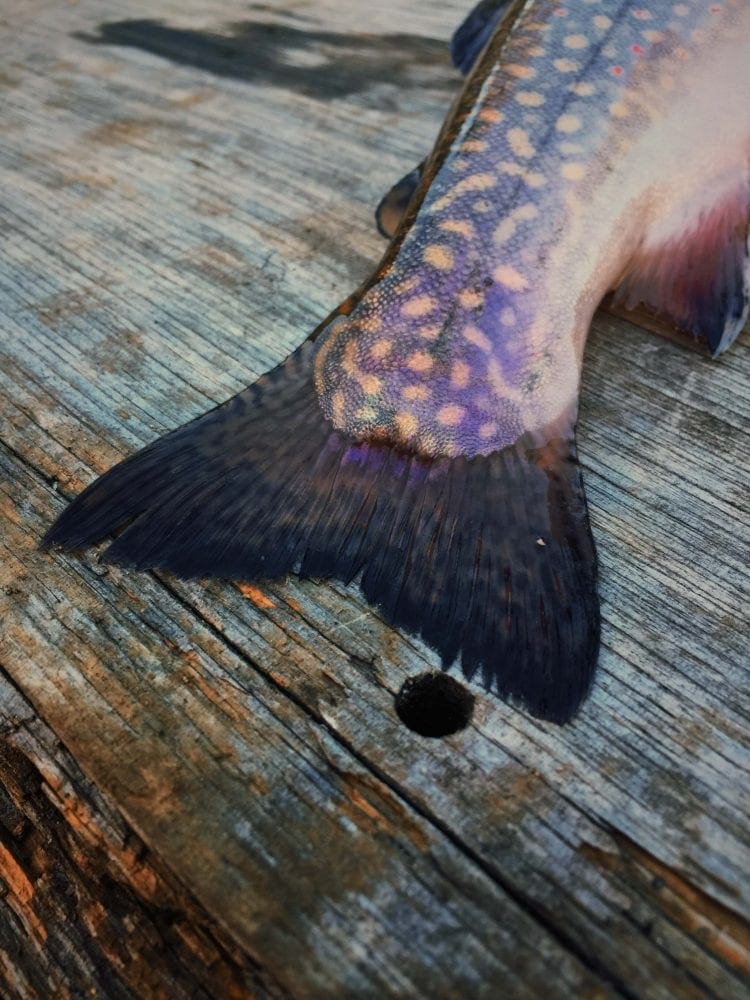 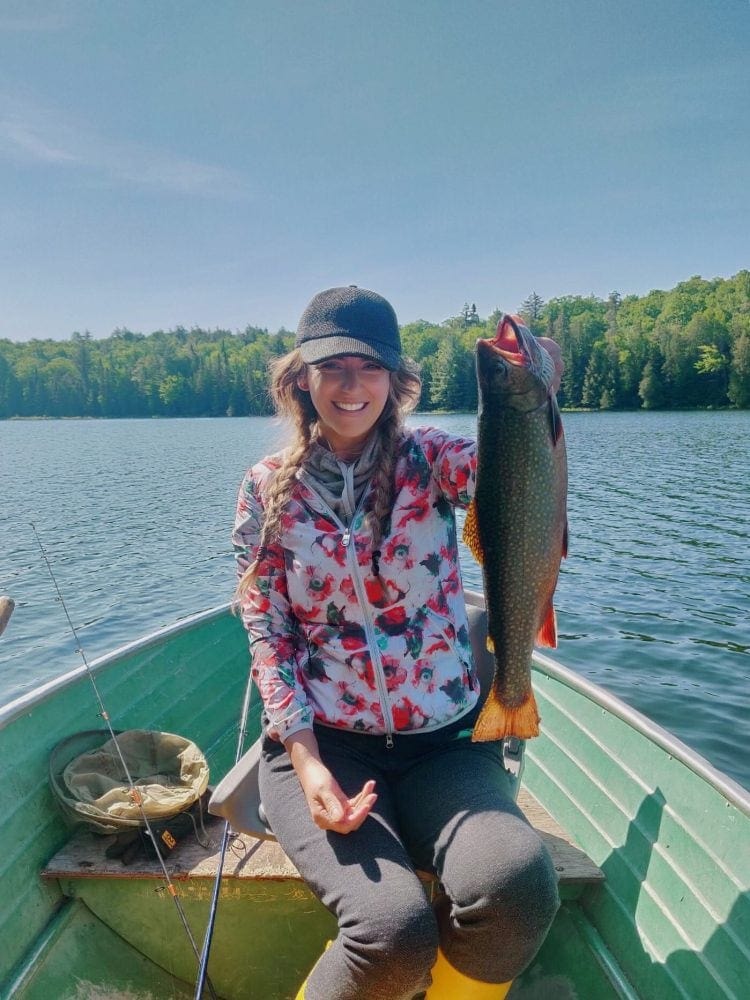 This is some of the best trout fishing in Ontario.

The trout in the picture above was almost 17 inches.

The largest I caught was 19 inches. Considering how small the lake was where I caught that particular specimen, it felt like a miracle.

I suppose it’s just a part of the magic of this place.

But I don’t fish for trophies or bragging rights. I fish for food, to fill the freezer for the winter months. And trout is some of the best eating for freshwater fish. Smoked or grilled are my favourite preparations. The flesh is bright pink and firm like their salmon cousins.

I fish to scratch the surface of those mysteries, for nearness to the beautiful, and to reassure myself the world remains. I fish to wash off some of my grief for the peace we so squander. ~ Carl Safina

The best of the lakes require hiking in.

It's not easy going with a motor, battery, gear, and water.

A few of the lakes have small safe-ish canoes hidden at the banks for us to use. It would be serious work to portage a canoe through this thick wilderness, but we have had to do that too. You can spend the entire day hiking to the various lakes, and the trails are not marked. 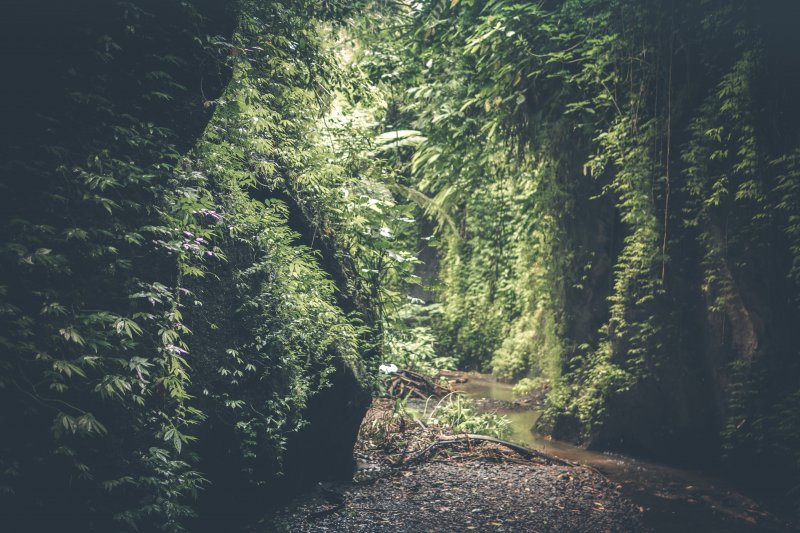 We had a bad, largely ineffectual map, and no idea where we were going. Intense rains in Ontario had transformed the forest into an overgrown thicket, nature desperate to reclaim ground. It was maddening for the mosquitoes and black flies that swarmed looking for a way past the netting, thick pants and boots we wore. We were overheating early on from the layers. The humidity made it feel like a rain forest.

At one point I was so fed up with the netting across my eyes distorting my vision that I flung it off my head just to get a moment of respite.

And the mosquitoes swarmed accordingly. I didn’t care in that moment of madness; 3-hours into what should have been a 45-minute hike.

We were lost but couldn’t admit it to ourselves yet.

Finally, we saw a break in the trees, glimpses of water in the distance.

But just like a mirage, when we got to the lake, it was little more than a muddy swamp.

An abandoned, dilapidated duck blind stood in the muck. It looked like it hadn't seen people in years. Dead trees lined the shores giving an eerie feeling to the setting. It felt like a scene in a horror film, the one right before things start to go really really wrong.

We were lost. The worst part? We had NO idea what lake we were on.

The useless map showed countless possibilities. We had no GPS. We had no compass. We were several days of walking away from civilization.

There is no cell service whatsoever. We were overheating in our protection layers, burdened down by the weight of the gear, and suddenly exhausted. It dawned on me that my iPhone has a compass, that it works despite the lack of a signal. I took it out and we guessed -- wildly, but ultimately correctly -- that if we headed northeast, we would probably hit the lake we wanted.

It was a frantic rush unlocking the canoe, attaching the motor, and getting into the middle of the lake away from the biblical plague of insects where we could finally shed our wet layers.

Five minutes later, out on the water, I caught my trophy brook trout. My reward. The hike was a penance, but I decided it had all been worth it.

The fishing was incredible all day. We made it back to the ramshackle cabin and its peaceful lake with no further troubles. 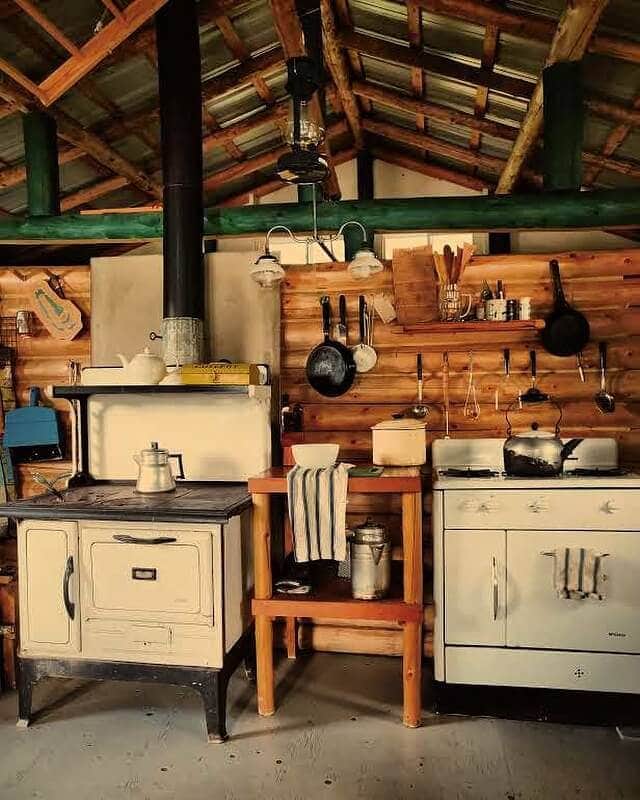 Despite the added heft of the four beautiful speckled trout we kept, the hike back felt lighter. And later on that evening, eating the trout I had caught and drinking beer in the soft glow of the propane lamps, we could laugh about the near misfortune and vow to never be so stupid again.

I come back here again and again through the trout fishing season. As often as I can.

I do not apologize for keeping it to myself, I think we all deserve to keep some secrets. In this age of social media where everything is within reach. Everything has been spelled out, discovered, mapped, and geotagged on Instagram — I want there to be things left that I can still discover by beautiful accident. 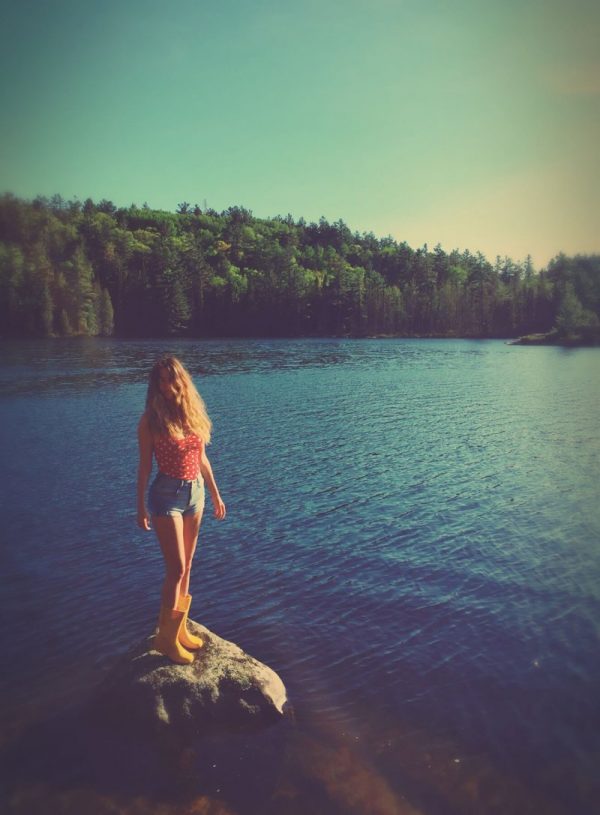 ....or maybe you have your own secret fishing spot?

Previous Post: « 15 Chicken Recipes That Won't Bore You To Tears
Next Post: 5 Books To Help Prepare You For Natural Childbirth & Labour »